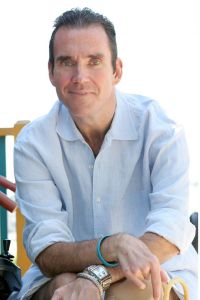 Jim MacLaren lived in the USA and attended Yale University where he played football and other sports. After moving to New York in 1985, Jim was involved in a road accident and lost his left leg below the knee. After a long recovery and many hours of rehabilitation, Jim began to compete in triathlons where he routinely finished ahead of 80 percent of the able-bodied athletes.

Then, in 1993, his life took another cruel turn. He was competing in a triathlon in California when two miles into the bike leg, on a closed course, a traffic marshal misjudged Jim’s speed approaching an intersection. The marshal directed a van to cross the street and the van collided with Jim. He was hurled into a signpost which caused Jim to break his neck at the C5 vertebrae, paralysing him.

Friends and family gathered around to support him and in 1997 the Challenged Athletes Foundation (CAF) in San Diego was established for Jim MacLaren. From the desire to help one athlete, today this organisation helps thousands of children and adults to lead an active lifestyle through fitness and sports.

Over time and with his inner strength and determination, Jim became a motivational speaker and in 2005 he was awarded the Arthur Ashe Courage Award by Oprah Winfrey.

Jennifer had known Jim for about three years and in May 2010 she travelled to the USA and visited him in Pennsylvania but sadly that was the last time she would see him as he passed away on August 31, 2010 at the age of 47.

With permission from Jim’s sister and his family in the USA, Jennifer created Uncle Jim in memory of this remarkable and courageous man.